https://www.elkhorn.lib.wi.us/wordpress/
About the Virtual Museum of Geology's Traveling Educational Display
The Virtual Museum of Geology's Traveling display consists of a selection of geological specimens representing the wonders of the natural world. The display, which has been traveling for over 2 years, gives viewers a further understanding of mineral varieties, the creation of fossils, inspires the hobby of geological collecting as well as introducing other geology topics.
The general display highlights various minerals of differing colors, shapes, crystal forms, sizes and rarity, as well as fossils from the Triassic, Jurassic and Cretaceous Eras.
Additionally, some displays may also include one or more of the following add-on sections:
- Cut Gemstones
- Meteorites and other Space Rocks
- Mineral Fakes and Laboratory-grown Specimens
- Fossil Highlights (Rare and unusual specimens including Insects In Amber, Woolly Mammoth Hair, Dinosaur Eggs and more.)

Venues interested in hosting the Virtual Museum of Geology's Traveling Geology Display should contact us.
Requirements include an appropriately-sized locking display case and lighting, or a nearby electrical outlet available for our lighting.

Additional information on selected specimens in the Virtual Museum of Geology Traveling Display:

(Some of the below specimens may not be exhibited at all of the venues.) 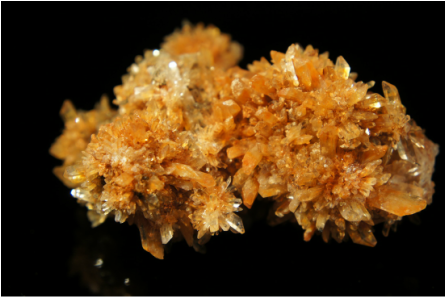 This mineral generally forms from the oxidation of fluorite ore deposits, where at times bits of fluorite can actually still be seen on creedite specimens. Radiating sprays of fine translucent to transparent prismatic crystals are very fragile. Until the rather recent discovery of creedite in the Navidad Mine in Durango, Mexico (where this specimen is from), this mineral was fairly hard to obtain for a mineral collection. Although violet creedite is the more common mineral color to be found, specimens such as this one from the Navidad Mine tend to be transparent to bright orange. On display here is an intergrowth of multiple connected "floater balls" of creedite.
Past locations the exhibit has been displayed at:
​Muskego Public Library (Sept. 1 - Oct. 3, 2016)
Hales Corners Library - Hales Corners, WI
Kenosha Public Library (North Side) - Kenosha, WI
New Berlin Public Library - New Berlin, WI
​Racine Public Library - Racine, WI (April 2017)
Lake Geneva Public Library - Lake Geneva, WI (October 2018)
Muskego Public Library - Muskego, WI (November 2018)