Eocene Epoch - Green River Formation deposits are found in Colorado, Wyoming and Utah, generally along the present-day Green River. As an important lagerstatte, the Green River Formation sediments represent a continuous record of deposition that spans a 5 million year period from 53.5 to 48.5 mya. During that time, the uplift of the Rocky Mountains was nearly complete, creating a landscape of rugged mountain highlands separated by intermountain basins, many of which were occupied by lakes. Three primary ancient lakes identified from sediment concentrations have been given the names Lake Uinta, Lake Gosiute and Fossil Lake. Each lake represents deposits during different Tertiary timeframes:
- Fossil Lake (Early Eocene)
- Lake Gosiute (Lower to Middle Eocene)
- Lake Uinta (spans most of the Eocene Epoch) 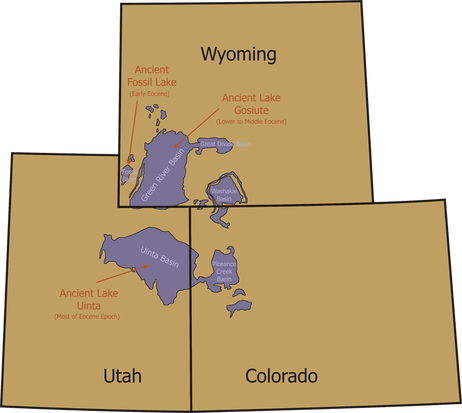 PALEOENVIRONMENT
The climate during the early Eocene was warm and temperate to sub-tropical, then transitioned to slightly drier at the start of the mid-Eocene. Intermountain basin lakes in the Green River area were surrounded by forests of sycamores, while palms and cat-tails dominated the lake margins.
LITHOLOGY
Vast amounts of sediment were transported in the Green River area from the Rocky Mountain highlands to the intermountain basins. Mountain streams drained into lakes, forest and lake margin vegetation dropped to the ground and lake bottoms to decay while volcanic fields spewed ash into the air. These processes among others created the lithology that is found in the rocks of the area today. Sediments and associated geologic features found in the Green River Formation deposits include deltas, beaches, springs and rocks from center and near shore environments.

Samples of sandstones and oolitic grainstones are found in the Green River Formation, although fossils are generally preserved in finer-grained limestone matrix such as packstones, mudstones and siltstones. Oil shales and coals are found...remnants of the millions of years of decomposing forest vegetation. Additionally, some sediments exhibit ash layers from the then-active Absaroka and San Juan Volcanic Fields. These depositional processes along with many streams kept a steady supply of sediment flowing into the lowlands, and ultimately intermountain basin lakes. Sediment from the Green River Formation is found primarily from three of these ancient lakes, all of which represent slightly different depositional time frames, and as such, contained differing flora and fauna:
- Lake Gosiute: largest in area of the three; lower to middle Eocene
- Lake Uinta: most surface area, shallowest and existed the longest of the three; spanned most of the Eocene Epoch
- Fossil Lake: smallest, deepest and shortest-lived of the three; most abundant fossils; early Eocene
Sediment layering is evident in the Green River Formation deposits, where cyclicity is observed. Dark layers represent deposition during the growing season, while light layers were deposited during dry periods (winter). A pair consisting of a dark and a light layer is called a varve. Each varve represents an annual cycle of sedimentation (1 year). This regular, annual cyclicity of deposition, along with Chron C22r methods, radiometric dating and paleomagnetism make accurate dating of sediments possible.


Most of the nearly pristine fossils on the market and in museums Worldwide are collected from Fossil Lake deposits, which are generally separated into two distinct zones:
- Split Fish Layer: Average thickness of 6.5 feet. Abundant fossils of fish and other organisms, although diminished fossil quality due to the tendency of fossils to split between the top and bottom layers when separated. Fossils require little if any preparation.
- 18-inch Layer: Limestone varves, oil shale and volcanic ash layers representing 4000 years of deposition. Some of the best preserved fossils in the World come from this zone, as fossils are preserved only on one sheet when layers are separated...the top layer of matrix acting as protection to the fossil. Some fossil preparation is generally required.


Fossil preservation in the Green River Formation is thought to be so complete due to a couple of ideal environmental conditions present in the lakes:
- Relatively constant deposition of sediment in calm environments: allowed for rapid burial of dead organisms or plant material, offering protection from bacteria, the elements and scavengers.
- Anoxic conditions: lack of oxygen in deeper aquatic environments prevented scavengers from disturbing dead organisms and plant material. 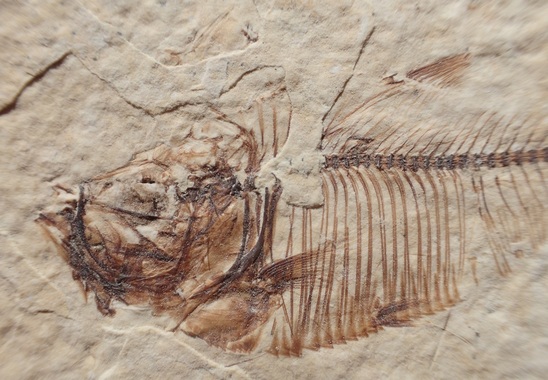 
Plants:
Plant material found in the Green River Formation gives us a glimpse into the lush forests that inhabited the intermountain basins. Remnants of many types of trees are found including: oaks, maples, palms, sycamores, fir and spruce (the last two from the higher elevations). More than 325 types of leaves, seeds and flowers have been found so far.
Additional plants represented:
- Ferns
- Cat-tails
- Flowers
- Fruit
Unique information can sometimes be inferred from fish fossils in the Green River Formation.
- Relative temperature: Cold weather generally causes dead fish to sink faster due to a less inflated swim bladder, and if accompanied with rapid burial, can lead to relatively intact fossil specimens. Warmer temperatures cause a swim bladder to inflate, keeping the dead fish suspended for a longer period of time higher in the water column, inevitably leading to disarticulated skeletons and scattering of bones in the below sediment.
SOME FOSSIL FISH OF THE GREEN RIVER FORMATION
Knightia sp. (Knightia eocaena & Knightia alta)
Small fish related to herring. Thought to eat plankton. Most common fish species found in Green River Formation deposits.
Knightia eocaena is most common in Fossil Lake, while Knightia alta is most common in Lake Gosiute.
Diplomystus dentatus
A type of herring. Second most common fish found in Fossil Lake. Occasionally found fossilized with fish in their mouths or stomachs.
Mioplosus labracoides
A type of perch. Solitary predator. Most common fish in the Green River Formation to be found with other fish in its mouth.
Priscacara sp. (Priscacara liops & Priscacara serrata)
A type of perch. Priscacara liops is thought to have formed schools. Priscacara serrata grew much larger than Priscacara liops. 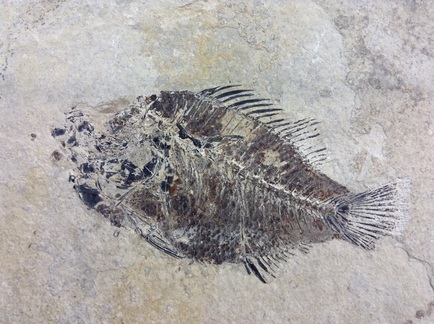 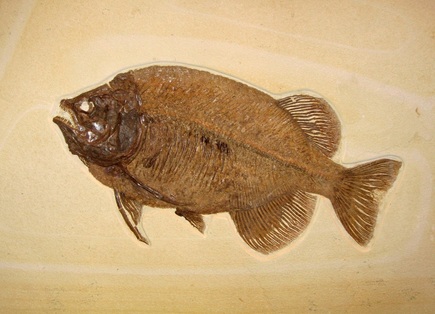